Impressive Results During Unpredictable Season, All Eyes on 2021 and All-New FIA Ford Ranger 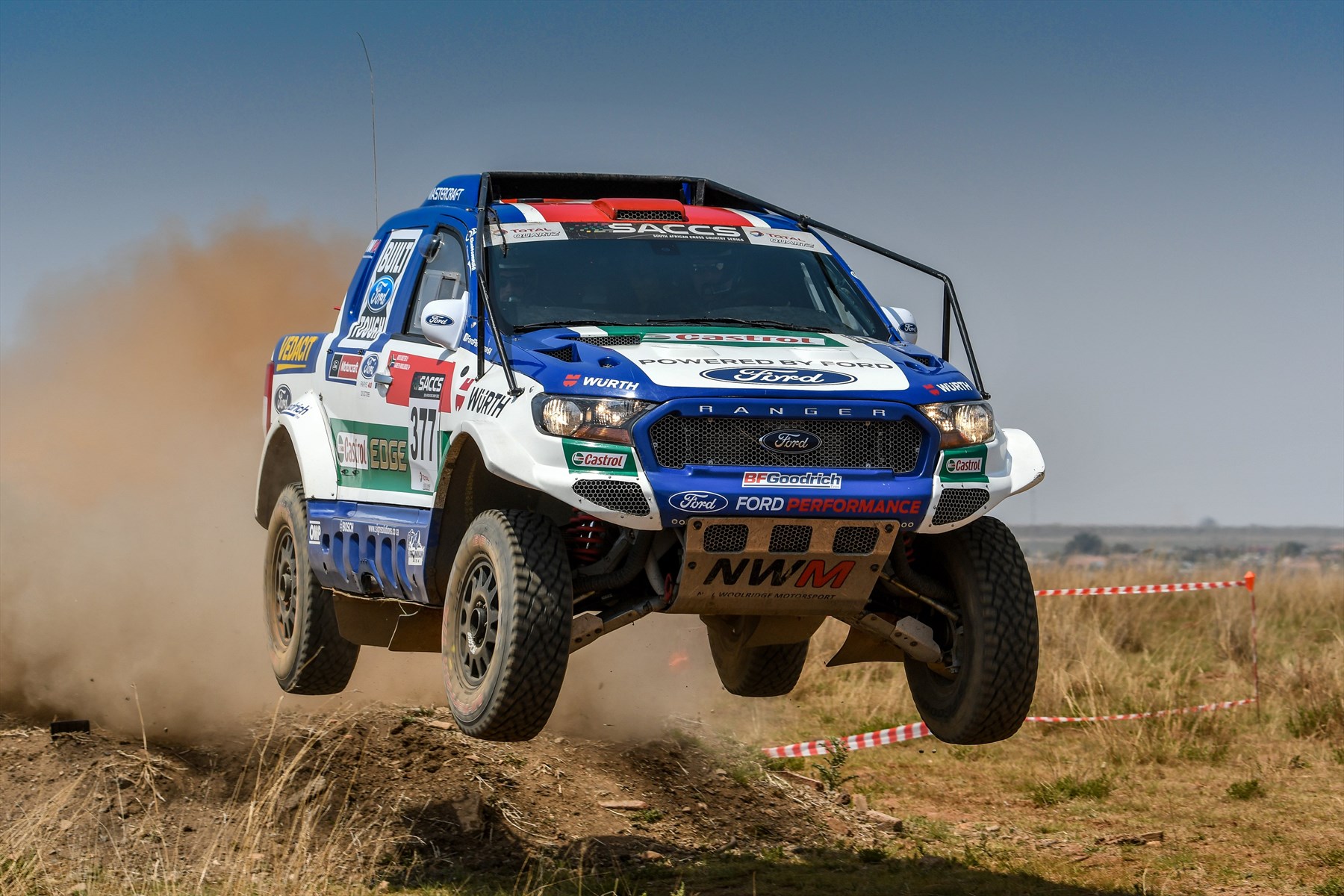 Impressive Results During Unpredictable Season, All Eyes on 2021 and All-New FIA Ford Ranger

PIETERMARITZBURG, South Africa, 17 November 2020 – As with most aspects of our lives this year, the 2020 South African Cross Country Series (SACCS) was thrown into disarray with the COVID-19 pandemic resulting in the championship being cut from the planned seven rounds to just five events – with an almost six-month hiatus between the first and second races. However, it still delivered plenty of off-road racing action and excitement.

For the Ford Castrol Cross Country Team, the first half of the season was intended as a period of consolidation and preparation, competing with the current Neil Woolridge Motorsport (NWM) built and run Ford Ranger V8. The team implemented minor upgrades to the pair of Class T championship-winning specification Rangers carried over from the 2019 season to make them more competitive in the premier FIA class. Simultaneously they were heavily involved in designing and building the highly anticipated, all-new FIA Ranger – powered by Ford’s mighty 3.5-litre EcoBoost twin-turbo V6 petrol engine.

With the debut of the all-new NWM Ranger originally scheduled for the Botswana Desert Race in June, the team’s aim for the first half of the season was to score solid points in a class dominated by significantly faster and higher specification full FIA class competitors.

However, the Ford Castrol NWM team proved at the Mpumalanga 400 in February that the current Ranger V8 remained competitive – particularly in tight and technical terrain – as Lance Woolridge and new co-driver Elvéne Vonk claimed an impressive podium position in third overall, despite it being their first outing together.

Team-mates Marcos Baumgart and Kleber Cincea showed impressive pace in the second NWM Ranger, but a snapped side-shaft saw them finish ninth overall. This landed up being the Brazilian crew’s only South African race for the year, with the COVID-19 travel restrictions putting a halt to their local campaign.

The SACCS teams had to wait all the way until the Bronkhorstspruit 400 in August for racing to resume for round two, with Gareth Woolridge and Boyd Dreyer returning to the hot seat in place of Baumgart and Cincea. Although this was their first event in 14 months, the young pair impressed yet again, finishing sixth overall on their FIA class debut. However, it was a close-run affair with a mere 47 seconds separating them from Lance and Elvéne in seventh place.

Behind the scenes, the development of the all-new FIA Ranger had been severely hampered by the coronavirus pandemic. The build of the first vehicle had been delayed due to the COVID-19 lockdown, while the international travel restrictions prevented the NWM team’s global component suppliers from assisting with the set-up of the new vehicle – most notably BOS Suspension in France, which had supplied NWM with a completely new suspension for the Ranger, with this being its first application globally.

Accordingly, it was decided to continue with the Ranger V8 for the remainder of the season, and to use the balance of the year to test and develop the new vehicle in preparation for the 2021 championship.

A new event joined the calendar in September in the form of the Total Agri 400, staged at NAMPO Park near Bothaville. A challenging route, featuring a wide variety of terrain including soft desert-like sand, tested the teams to the limit, and the Ford Castrol NWM squad was rewarded with a fourth-place finish for Gareth and Boyd, with Lance and Elvéne ending sixth.

There was plenty to celebrate in Class T for the NWM-supported privateers, as Malcolm and Frans Kock claimed their first victory ahead of Wors Prinsloo and Andre Vermeulen in a second NWM Ford Ranger, with the crews ending an impressive 9th and 10th overall respectively. This helped the Ford NWM team earn both the Manufacturers Award and Team Award.

The championship drew to a close with a unique double-header in the Free State town of Parys at the end of October, starting with the Ford Parys 400. Gareth and Boyd did the title-sponsor proud by claiming a superb podium finish with third place in a hard-fought event. Unfortunately, Lance and Elvéne were hampered by punctures and overheating electronics after an accident that destroyed the vehicle’s air-con compressor, dropping them to eighth.

Once again, the NWM privateers led the charge in Class T as Prinsloo and Vermeulen scored their first national win in the category, with Malcolm and Frans Kock finishing second. The result contributed to the Ford NWM team winning the Manufacturers Award and the Team Award for the second event in a row.

The stage was reset the next day for the season-ending Toyota Gazoo Racing SA Vaal 400. Lance and Elvéne were on track for a solid fifth-place finish until a bolt holding the left front hub onto the lower control arm snapped within sight of the finish. After making emergency repairs, they eventually crossed the line and wrapped up the season with a full tally of finishes.

Although Gareth and Boyd lost significant time during qualifying, as they were stuck in the dust of a competitor with a flat tyre, they pushed hard and made up 10 places by the end of the race to end fifth overall. It was another good result in Class T as Malcolm and Frans Kock earned their second consecutive runner-up trophy.

In the final SACCS standings, Gareth and Boyd were classified sixth overall in the drivers and navigators championships respectively, with Lance and Elvéne, trailing them by a single point in seventh place. In Class T, Wors Prinsloo secured third overall, with Malcolm Kock fifth – with just two points between them in the end.

“The 2020 cross country season was challenging on many fronts, but we are happy to have not only competed during this unpredictable year, but also doing well in the FIA class which is dominated by Dakar Rally stage and overall winners,” says Neil Woolridge, team principal of NWM. “We were always going to be on the back foot competing with our Class T vehicles from last year, but the team put in a lot of effort to ensure that we were able to take the fight to our rivals, and we can justifiably be very proud of our results.

“With two wins in Class T and a string of podium finishes, our NWM Ford Ranger privateers did a superb job too, helping us score both the Manufacturers Award and Team Award on two of the five events held this year,” Neil adds. “As a result, we have received interest from several teams to compete in NWM Rangers next year, which will help ensure that Class T continues as a very competitive class for privateers.”

The focus for the NWM squad is now on ramping up the testing and development for the all-new FIA Ranger, building up towards an all-out assault on the overall SACCS title for 2021. “We’ve been doing a lot of testing with the new Ranger, and have been thoroughly impressed with its performance from the outset,” Neil states.

“There is still a lot of work to do, particularly in refining the suspension set-up, and there are numerous hurdles to cross with the FIA to certify the final homologation of the vehicle before we can go racing,” he adds. “However, we are confident that we have a formidable package, and that the new EcoBoost V6-powered Ranger will define a new era for cross country racing, both in the South African championship and internationally.”