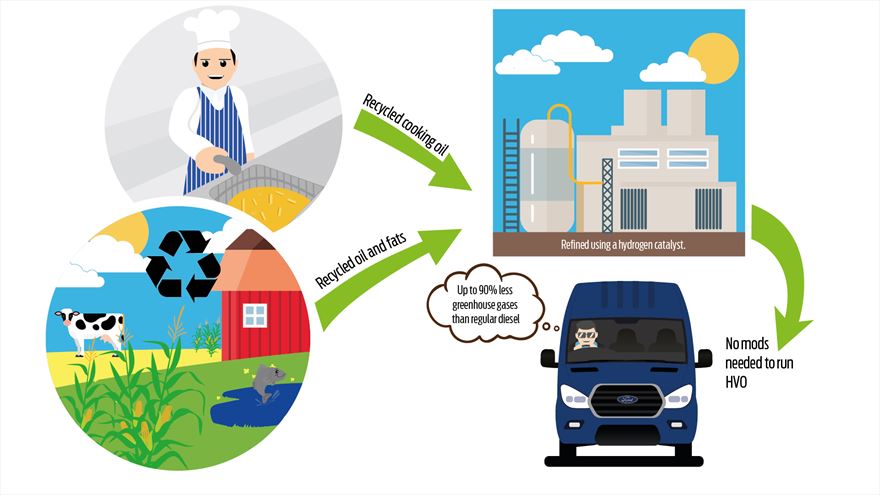 Fried Food Could Give Planet a Health Kick; Now Transit Runs on Green Fuels Made from Cooking Oil

PRETORIA, South Africa, 12 February 2020 – Ford has approved the use of Hydrotreated Vegetable Oil (HVO) in its Transit vans in Europe. This renewable diesel fuel is based on waste oils, including used cooking oil that can be sourced from restaurants and takeaways – and even kitchens at home.

The use of HVO – or renewable diesel – in place of conventional fossil fuels can contribute to improvements in air quality. Greenhouse gases can be reduced by up to 90 per cent compared with regular diesel; and vehicles run on HVO emit less nitrogen oxide (NOx) and particulates than other diesel vehicles because the fuel contains no sulphur, or oxygen.

Ford thoroughly tested HVO in its 2.0-litre EcoBlue engine to make sure no modifications would be needed, and servicing would not be affected. No further development of the fuel was needed before it could be used in Ford’s latest Transit vans.

“Enabling vehicles to run on fuel made from waste, including used cooking oil, may sound far-fetched but it is in fact a reality,” says Dale Reid, Product Marketing Manager Ford Motor Company of Southern Africa. “While HVO is not available in South African and is currently only available in limited markets in Europe it will be interesting to monitor the interest in uptake. Industry experts in Europe predict that HVO will become more commonly available in the future as the appetitive for renewable energy grows.’