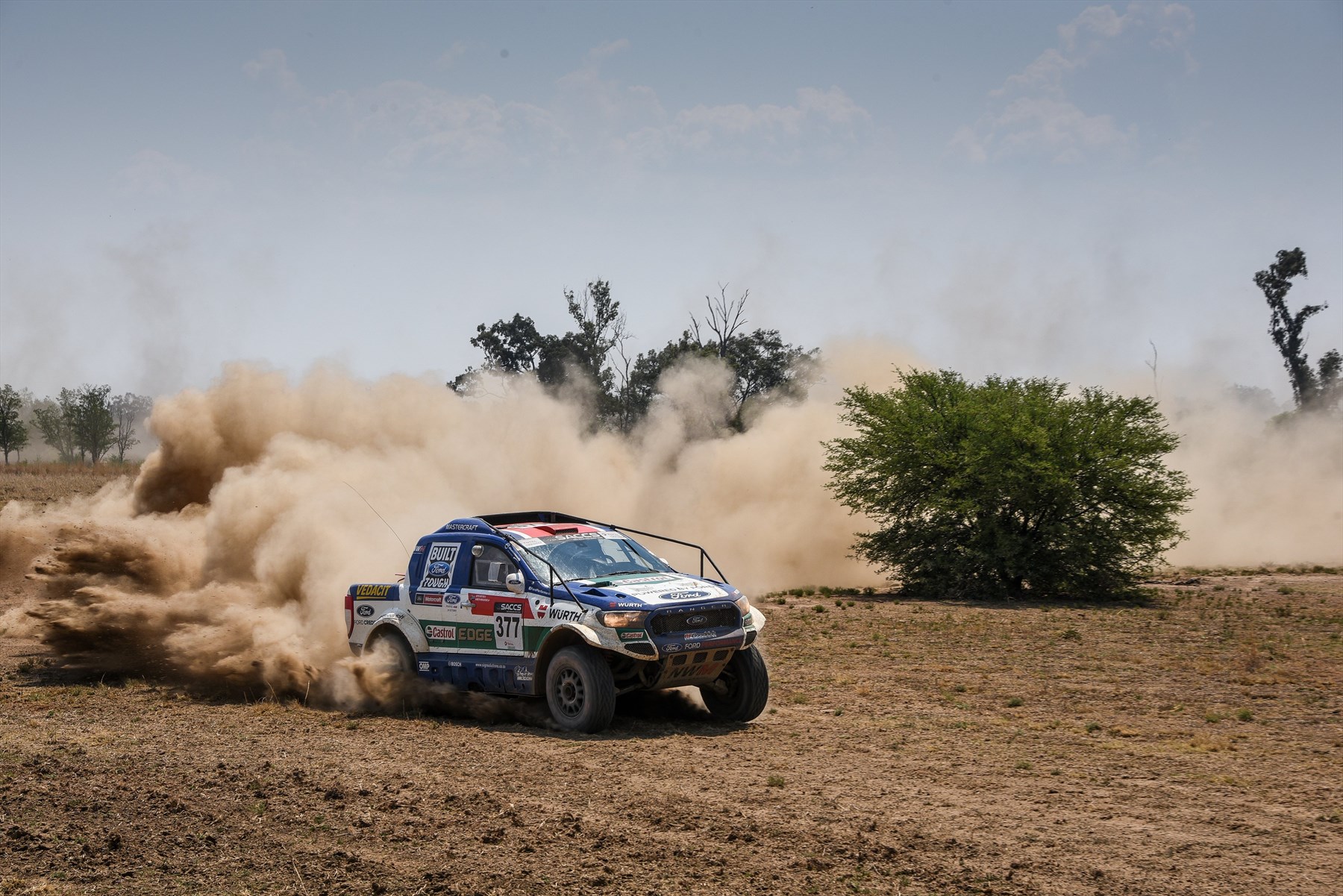 Parys, South Africa, 25 October 2020 – The 2020 South African Cross Country Series (SACCS) wrapped up this weekend in the Free State town of Parys, with a unique double-header delivering plenty of action and excitement, and a strong showing for the Ford Castrol Cross Country Team.

The two days of racing was held in extremely hot, dry and dusty conditions that pushed the driver and co-driver pairings, the support crews and the cars to their limits.

The action commenced on Friday 23 October 2020 with the Ford Parys 400, starting with a short 14km sprint for the qualifying to determine the starting positions. With such a short distance for the prologue, the times were bound to be exceptionally close – and that’s exactly how it played out, with the top five competitors separated by a mere 14 seconds, and the two Ford Castrol entries posting identical times of 9 min 28 sec. Due to their higher seeding coming into the event, Lance Woolridge and Elvéne Vonk (#334) were classified fourth, with team-mates Gareth Woolridge and Boyd Dreyer fifth in their Neil Woolridge Motorsport (NWM) V8-powered Ford Ranger.

The first 164km loop saw Gareth and Boyd trade places with Lance and Elvéne by the time they reached the scheduled 30-minute service stop at the Parys Airfield, with tricky navigation, soaring temperatures and high speeds in excess of 180km/h being defining characteristics of the race.

Having had to deal with a faulty GPS map on the first loop, there were no such issues on the second 164km stint for Gareth and Boyd, allowing them to push hard – and they were rewarded with a superb third place overall and their first podium of the year.

“I wanted to push on this event for a good result, but we got lost about four times on the first lap due to our GPS not showing the route,” Gareth explains. “On the second lap the GPS had plotted the route so we could go a lot faster, and we had a perfect run with the Ranger performing faultlessly. Third place overall is like a win for us, as we’re still running what is basically a Class T car against our full FIA competitors, so I’m really happy.”

Unfortunately, Lance and Elvéne saw their fortunes head in the opposite direction. “We had a clean run through the first loop, and on the second lap we pushed really hard to make up some time. I took a bit of a risk through a rocky section and picked up a puncture on the right rear. We replaced the wheel, and then turned onto a fast district road. Just 5km later we had a flat tyre again on the same wheel. After fitting our last spare wheel we had to be a bit more careful for the remainder of the race, but we were matching Gareth’s split times.”

That was until they struck a bird with the grille of the Ranger, which resulted in the air-con compressor being damaged. With the ambient temperatures peaking at almost 40 degrees Celsius outside the vehicle, the cabin was at least 15 deg C hotter. This caused havoc with the car’s electronics, as the power distribution module (PDM) mounted on the transmission tunnel topped out at a staggering 130 deg C, which caused it to switch off repeatedly as a self-protection measure, cutting the engine in the process. The exhausted crew managed to nurse the vehicle across the finish line, ending 11th overall and eighth in the FIA class.

It was all glory for the Ford Ranger amongst the NWM-supported Class T privateers, as Wors Prinsloo and Andre Vermeulen scored their first national win in the category, with Malcolm and Frans Kock joining them on the second step of the podium.

Fittingly, on the Ford Parys 400, Ford/NWM earned both the Manufacturers Award and Team Award to wrap up a successful day of racing.

Back for more sizzling hot action on day two

The same race format followed on day two with the Toyota Gazoo Racing SA Vaal 400 – including the 14km qualifying sprint. Lance and Elvéne were fifth fastest, having gone 45 sec quicker than Friday’s run. Still without air-conditioning and facing the prospect of even higher daytime temperatures, the team had improvised by directing a cooling pipe onto the PDM to prevent the overheating issue.

But for Gareth and Boyd, it was a frustrating start to the race. For approximately half of the qualifying lap they were stuck in the thick dust of a Class T competitor with a puncture, who was continuing on the flat tyre and eventually driving on the rim, and refused to move over to let the vehicles behind pass. Although they only lost about 30 seconds as a result, the short distance and extremely close times saw the #377 Ranger drop to 15th overall – with a lot of ground to make up during the main race.

As the leading Ford Ranger crew, Lance and Elvéne enjoyed a superb run through the initial, slightly longer 168km loop for Saturday’s race, and entered the service park in a solid fifth place overall. Behind them, Gareth and Boyd were charging through the field and had made the most of the two-minute dust gaps to claw their way back into contention in sixth place – and the running order for the two Ford Castrol NWM entries looked set to remain that way for the remainder of the punishing race.

However, it was sadly not to be, as Lance and Elvéne saw their solid performance come to a screeching halt approximately 3km from the end of the race. A bolt holding the left front hub onto the lower control arm snapped off, and they were stranded on the side of the track. With emergency repairs carried out by the NWM service crew, they were able to limp across the finish line and incurred a five-hour penalty for receiving outside assistance. Nevertheless, the crew’s determination, tenacity and never-say-die attitude saw them classified last and having finished every race this year.

Gareth and Boyd ultimately crossed the line fifth overall to round out an encouraging weekend of racing. In Class T, privateers Malcolm and Frans Kock concluded their weekend with their second consecutive runner-up trophy.

“It’s been a very difficult year for everyone due to the impact of COVID-19, but if I look at what we’ve achieved with our team and our current car, which is not up to the latest specification of our competitors, it has been a brilliant year,” says NWM team principal, Neil Woolridge.

“Both of our crews drove exceptionally well this weekend, and it was fantastic for Gareth and Boyd to get a podium on Friday,” Neil adds. “Lance and Elvéne were also on fire until they picked up the punctures, and then had to contend with the high temperatures and the car cutting out as a result.

“On Saturday, the roles were reversed, with Gareth and Boyd held up during qualifying then fighting their way back to a superb fifth place. Lance and Elvéne were pushing really hard and didn’t put a foot wrong, so it was a bit disappointing that they had trouble right at the end. However, the entire team can be exceptionally proud of our performance and results this year,” he proudly says.

It’s the end of the era for the current NWM Ford Ranger V8 in the premier class of the SACCS. “It’s a bitter-sweet moment for us, as the Ranger V8 has been a fantastic vehicle, having won two South African Class T championships and proved itself throughout the world,” Neil explains.

The Ranger V8 will continue to be raced by Class T for privateers next year, but the team’s focus is now on the highly anticipated launch of the all-new FIA Ranger, powered by Ford’s mighty twin-turbo 3.5 EcoBoost V6 engine for the 2021 SACCS championship. “We can’t wait to race the new FIA Ranger, and we are continuing our testing and development programme next week as we build up to coming out with all guns blazing to fight for race wins and the championship title next year!”