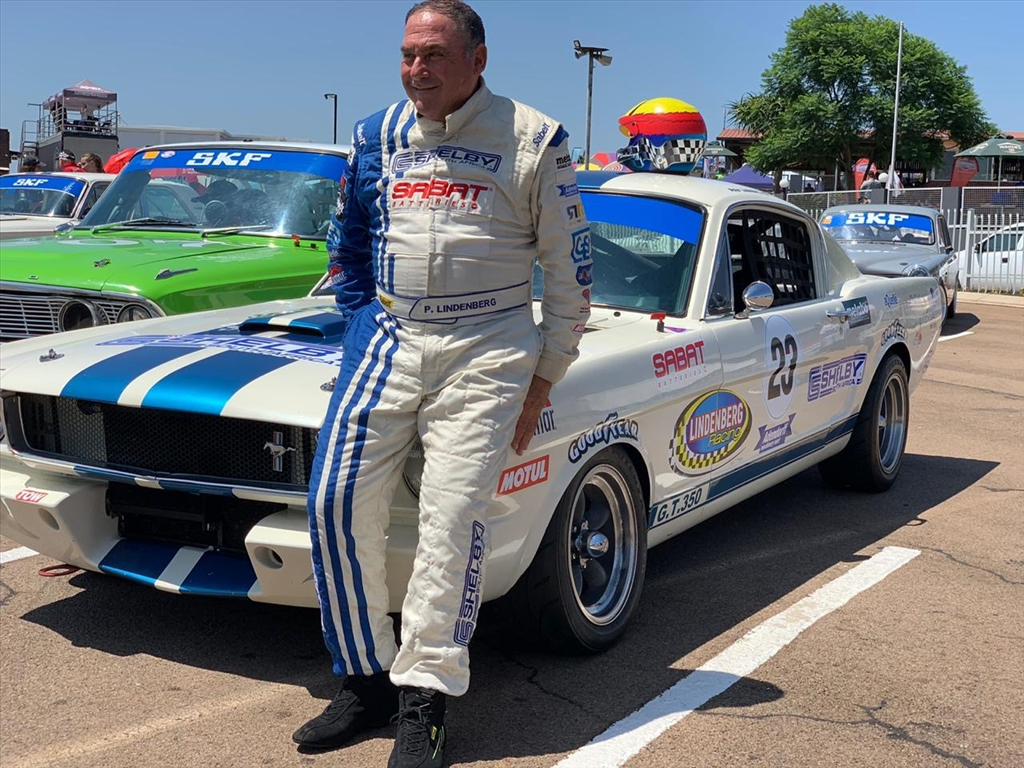 Some of his iconic racing Fords include the Ford GT40, Ford Sierra XR8, Ford Capri Perana and the Shelby GT 350 Mustang

PRETORIA, South Africa, 29 November 2021 – A championship battle that went down to the final race on the calendar is exactly how motorsport legend, and co-owner of Shelby South Africa, Peter Lindenberg wanted to retire from a phenomenal motorsport career.

Having missed the first two rounds of the V8 Legends of the 9 Hour championship due to COVID-19 travel restrictions, Lindenberg went on a winning streak in his 1965 Shelby GT 350 Mustang and arrived at the final race at Zwartkops less than five points adrift of the championship leader.

Starting second on the grid for the opening heat on 13 November, Lindenberg won his class, and then used his vast experience in heat two to control the race and do exactly what was required to claim the points advantage and be crowned champion.

“What a way to finish the championship and end my motorsport career on a high,” remarked Lindenberg after the race. “I’m not sad. In fact, I’m comfortable because it’s the right thing to do now. I am hugely privileged to have been racing for the last 43 years. One of the main things I believe in sport is to know when to get out, and this is the right time for me.”

Peter Lindenberg’s multiple achievements in motorsport are awe-inspiring. Over the course of his sporting career Lindenberg has won 23 national championships. His overall influence on the sports in which he competed has also earned him the respect from his peers and industry stakeholders.

“Lindenberg’s larger than life presence at the wheel will be sorely missed by everyone but he will continue to shine a bright light on motorsport for years to come,” says Doreen Mashinini, General Manager for Marketing at Ford South Africa. “His competitiveness and passion for the Ford brand has left an indelible mark on South African motorsport and we wish him well as he enters the next chapter of his life as well as his ongoing commitment to Shelby South Africa.”

Lindenberg received his Springbok colours 39 times, along with numerous international records and championships that were added to his collection. Despite balancing a busy schedule between water skiing and powerboating in the mid-to-late 1970s, he also found time to enter a few semi-competitive motor racing events.

His first memory of racing a car was in the Sigma Celebrity Challenge in 1976 – an event which paired sporting celebrities with motoring journalists. Lindenberg adapted quickly to the challenge and went on to win the event, catching the attention of another South African racing legend, Tony Viana. Two weeks later, Viana had successfully convinced Lindenberg to focus on motor racing.

Over the years, Lindenberg raced numerous high-performance Fords in the country’s biggest events. However, Fords were part of Lindenberg’s life long before he became serious about racing them. Besides his very first car being a 3.0-litre V6 Ford Capri, Lindenberg’s childhood was surrounded by Fords. His late father would tow their family caravan with a Ford Fairlane – a car that Lindenberg raced many years later in various Historic motorsport events. Lindenberg’s dad also owned a Mustang in the early 1970s.

Competing in categories like Group 1 and Group N, Lindenberg raced iconic Fords like the Escort XR3 Perana and the Capri Perana. “I owned a lot of those really potent modified Fords, including the Basil Green Gunston car which I had for about 34 years, I also owned a Sierra XR8, nicknamed ‘The Animal’, that Willie Hepburn built, as well as the famous – ex Peter Gough – Escort, number Y151,” remembers Lindenberg,

“The nice thing about all these cars is that they were truly South African, you didn’t get these anywhere else in the world, so I was really lucky. One thing about a Capri Perana and XR8 was that for slightly above average money, you got a rocketship!”

Progressing up to the premier WesBank Modifieds was another highlight for Lindenberg where he campaigned in a Ford Telstar V8, and later a Mustang. “I won a lot of races and championships,” says Lindenberg, reflecting-back over the decades.

In 1994 Lindenberg won the SA WesBank Modifieds championship followed by two runner-up positions in the late 1990s. He claimed the SASCAR title in 2005, then a further two championship titles in the South African Oval Nationals in 2006 and 2007. The later stages of his motorsport career have been spent in the popular Historics category where he has driven several legendary Fords, such as the Ford GT40 and a 1965 Shelby GT 350.

While motor racing has rewarded Peter with many irreplaceable memories, his off-track ideas helped create a brighter future for motorsport. Alongside Jimmy Price, Lindenberg was instrumental in establishing venues like WesBank Raceway, as well as setting up the popular SASCAR series which was created to level the playing field and make motorsport more accessible through homologated parts and lower running costs.

Lindenberg continues to keep his passion for Fords and motor racing alive through the Shelby South Africa dealership in Gauteng and the Shelby Modshop in the Western Cape, which he runs alongside his two daughters, Paige and Chiara.