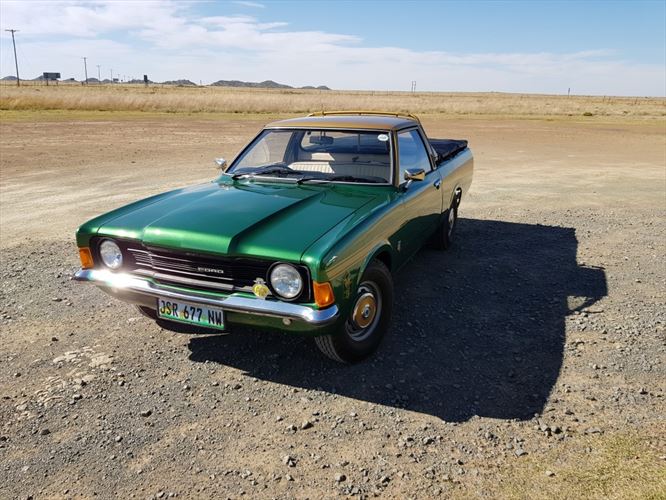 PRETORIA, SOUTH AFRICA, 18 September 2020 – A few years after the first Cortina bakkie was launched in South Africa in 1971, Ford released a limited edition of the Cortina MK3 bakkie, badged the Cortina Springbok edition. This unique vehicle, designed to commemorate the All Blacks rugby tour to South Africa, started a trend for the many iconic nameplates that would later arrive in Ford’s 96-year history in the country. This special bakkie receives a tribute during Heritage Month.

Influenced by the famous green and gold kit worn by South Africa’s national rugby team, the Springboks, Ford set about replicating the striking two-tone combination on the Cortina that was produced at Ford’s vehicle assembly plant in Port Elizabeth at the time. Ford then sealed the vehicle’s exclusivity by limiting production between Cortina bakkies (or pickups) and Cortina sedans. Among the South African population, the Cortina bakkie was affectionately given the nickname ‘bokkie bakkie’.

Painted in that resplendent green and contrasted with gold paint – most evident on the wheels and roof – the Cortina Springbok is still a sight to behold on the road, especially among rugby fans, although not everyone might grasp how rare a sighting it is. Many interested onlookers initially surmise that they’re looking at a MK3 Cortina with a custom paint job, rather than an authentic and serialised Ford model from the 1970s.

“We’ve celebrated Heritage Day with our locally-assembled Rangers before, but we’re really testing the extent of our country’s knowledge with this special Cortina Springbok”, says Dale Reid, Product Marketing manager at FMCSA. “Based on one of Ford’s most iconic vehicles of that period, its qualities of power and versatility were instinctively telegraphed through Springbok rugby. It is bound to stir our country’s emotions, and we’re thankful that there are owners who have given their time and effort to ensure that this page of Ford’s history has been so well maintained.”

As far as spotting one in pristine condition, Dr Brian Hodgson Rademeyer’s Cortina Springbok bakkie certainly looks as fit and healthy as the rugby team it was named after. The car has been in the family since Brian’s grandfather, where its dual-purpose practicality was thoroughly tested by long distance drives between Pretoria and Belfast in Mpumalanga, as well as by regularly filling the loadbox with coal for the fire back on the farm. As a result, the odometer reading has exceeded its own limitations multiple times and reset!

It was only recently, after inheriting the bakkie from his late father Hugh Rademeyer, that Brian began to realise that this family-owned Cortina bakkie held manufacturing and marketing provenance under its then-faded Emerald Green paint. Unable to find other owners of a Cortina Springbok edition, Brian enlisted the help of Gustav Nel and his son Johan from Pretoria to restore the Cortina bakkie. They had the experience as well as all the contacts to revitalise the paintwork and mechanical components successfully and professionally.

The car’s factory paint code was found, the three-speed gearbox overhauled, suspension and other rubber parts were sourced and replaced, and all other wear and tear components replaced. Brian wanted to modernise the safety of the vehicle by having three-point safety belts fitted. The 2.5-litre V6 engine was removed and thoroughly checked and is still under the bonnet. The gold-painted Springbok emblems were carefully traced and cut from vinyl.  Brian’s Cortina Springbok deviates from the original specification only because of its lighter genuine leather interior colour – compared to the darker vinyl in the original – as well as the rubberised loadbox with tonneau cover.

The Cortina bakkie is widely considered the genesis of the South African bakkie, according to Stuart Grant, who has devoted his career to studying Africa’s classic cars. “Technically the term bakkie stems from the colloquial term bak, which loosely translates to bowl or container, and scanning through 1970s motoring publications reveal that it wasn’t until the Ford Cortina pickup’s production was in full swing that South Africans started using the term bakkie for any light utility vehicle.”

Did the Cortina bakkie start the trend? It’s difficult to say for sure, but the word ‘bakkie’ has become an intrinsic part of South African culture and has been used as the generic term for all pickup models ever since, including the current Ford Ranger.

“Ford has been an integral part of the automotive landscape in South Africa since local assembly of the Model T began in Port Elizabeth in 1923. Ford remains one of the country’s largest vehicle manufacturers and exporters and these heritage cars have added to the local Ford story,” says Neale Hill, managing director of Ford Motor Company of Southern Africa (FMCSA).

“Heritage month complements our ‘For South Africa’ brand campaign that goes beyond just highlighting Ford’s corporate and product legacy. It captures the essence of what makes Ford, and the Ford family in South Africa, deeply involved and committed to this wonderful and vibrant country,” Hill adds.

Ford South Africa’s bakkie-loving culture has moved forward in long strides, from the pioneering Cortina to the modern Ford Ranger, which is consistently among South Africa’s top-selling vehicles. The current-generation Ranger Double Cab, in particular, popularised and redefined the segment when it was launched in 2011, contributing to it becoming the choice for thousands of active South African families.

However, the legendary Cortina is where it all started, and for the many South Africans whose blood runs green and gold with national pride, the Cortina Springbok holds a special place within Ford’s rich heritage in South Africa.