Going for Gold this Women’s Month 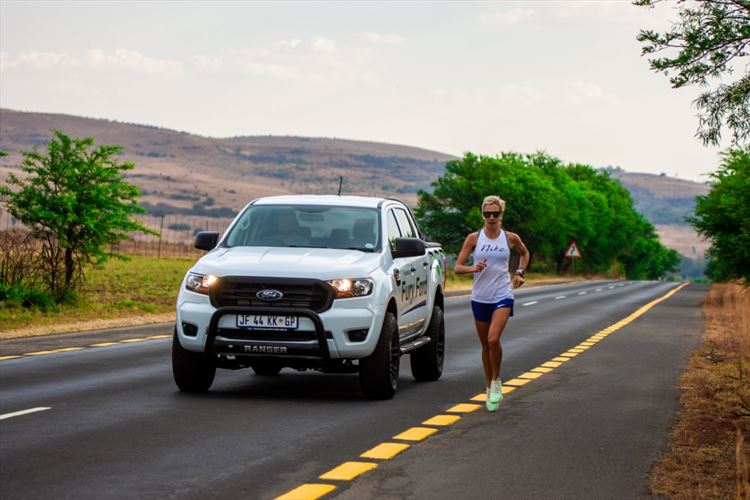 Going for Gold this Women’s Month

PRETORIA, SOUTH AFRICA, 14 August 2020 – Nothing in Gerda Steyn’s early life would have alluded to the fact that she would later develop a special talent and love for endurance running. Even by her own admission, “I never ran competitively and never showed any talent for running in my younger years, except perhaps to run away from my older brothers on a farm in Bothaville!”

Steyn would wait until her twenties before she thought of running as something significantly greater than just a hobby. Part of that realisation required her to quit her career as a quantity surveyor and focus entirely on the nuances of professional athletics. In a short time after that transition, Gerda became the 2019 Comrades champion (following a second-place finish the previous year) and the first woman to run the ultramarathon in under six hours! She’s also the 2018/2019 Two Oceans Marathon Champion – records that made her stand out as an ambassador for Fury Ford.

Another Fury Ford athlete, Tatjana Schoenmaker, is making waves in professional swimming and has transformed herself into South Africa’s top women’s swimmer. Contrary to Gerda, Tatjana’s sporting career started at a young age when she entered her first swimming competition at the age of eight, while participating in other school sports. By the end of high school, swimming had taken over exclusively and Tatjana now trains at the University of Pretoria, cramming in an average of eight or nine swimming sessions a week, plus a little bit of gym. “My goal for lockdown is to train strength and flexibility and to improve on the small things,” says Tatjana.

Having already been compared to former Olympic champion Penny Heyns, after eclipsing all her esteemed compatriot’s marks from the record books, Schoenmaker is developing into one of the country’s biggest stars in the pool as she continues her rapid rise at international level.

After raking in multiple medals as a teenager at the 2015 African Games, Tatjana went on to reach the podium again at the 2017 World Student Games. Reaffirming her talent in the 2018 season, at the age of 20, the breaststroke specialist became the first SA woman in eight years to earn a medal in the pool at the Commonwealth Games by securing the 100m and 200m titles at the 2018 spectacle on Australia’s Gold Coast. She also narrowly missed out on the bronze medal in the 50m breaststroke final, breaking the African records over all three distances.

Being able to triumph at any distance is also something Gerda knows a lot about. She started running in university, using the few kilometers and open spaces between residence and campus as a meandering yet versatile running track. However, it was only when she moved abroad to Dubai and joined a running club that the idea of being able to live her dream through running actually sank in. With a little peer persuasion and encouragement goading her on, Gerda signed up for the Comrades Marathon back in South Africa which proved to be something of a watershed moment in her career.

Gerda’s obsession to win and set new records left little doubt that international running success wouldn’t elude her for long.  In Dubai Gerda ran the 10km in a best time of 32:24 and did the RAK half marathon in a time 1:10.55.

Maintaining her incredible fitness and stamina, Gerda runs every morning while supplementing her fitness routine with elements of cycling, hiking and gym. Filling in any free hours left in the busy day, Gerda manages her social media account, using the platform to stay in touch with friends and family, and to share her experiences with her fans, including moments behind the wheel of her sponsored Fury Ford Ranger. “When I run, I need to trust the gear that I choose to wear, and I need to have a supportive team around me. When I drive, I want to have that same amount of security and confidence, and therefore I choose to drive a Ford Ranger.”

“When I see my Ranger, I am reminded of the power that I have within that will get me from point A to B in the best possible way. It’s a comfortable, yet powerful vehicle and I like to think that tough girls go hand-in hand with tough bakkies! I have never driven a vehicle so reliable and I can’t imagine going on a trip without my Ranger. I feel very honoured to be a part of the Ford family!”

For Tatjana Schoenmaker history was being made faster than it could be written, both on the South African continent and abroad. She displayed further potential in the 25-metre pool, and went on to shine again later in the 2018 campaign, breaking the long-standing national 50m and 100m breaststroke records at the SA Short-Course Championships in Durban. The following year she took another big step forward in her blooming career, wrapping up another impressive double at the World Student Games in Naples, Italy. After setting an African record in the 100m semi-finals, touching the wall in 1:06.33, she went on to win gold in both the 100m and 200m breaststroke finals. Later that season Tatjana made history by becoming the first South African woman to earn a medal at the biennial Fina World Championships in Gwangju, South Korea.

However, Tatjana’s never without her Ford Kuga for too long, admitting that it’s the car’s performance, size and agility she misses the most when she’s not at the wheel. “My sponsorship with Fury Ford has been amazing and is among my many highlights as a professional athlete.”

Gerda Steyn: “Running is a sport that can change your life! When you become a part of the running community, you never want to leave and you will soon find out that there is a place for anyone and everyone! Running changed my life and I want every young woman out there to experience that same feeling of self-worth and satisfaction that I feel when I run. It is humbling and rewarding at the same time and it makes you feel like you can conquer the world”.

Tatjana’s Schoenmaker: “Focus on one’s own improvement and own goals rather than comparing oneself to others. If you’re constantly improving, you’ll eventually get to the top. For me it was always about improving my time.”

Ford Motor Company Southern Africa is proud to pay tribute to these athletes during Women’s Month and to be united in the Go Further ethos of the Ford brand.