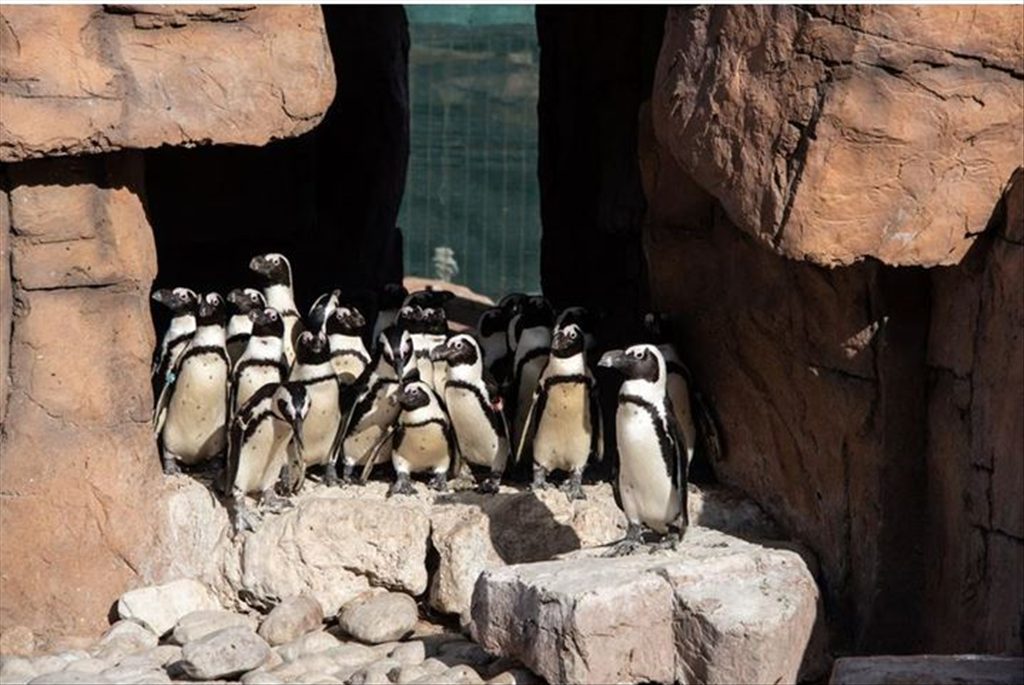 GQEBERHA, South Africa, 15 July 2022 – The Ford Wildlife Foundation (FWF) has extended its support for the Southern African Foundation for the Conservation of Coastal Birds (SANCCOB) in Gqeberha by contributing R50 000 towards its latest African penguin rescue and rehabilitation efforts.

Since March 2022, South African National Parks (SANParks) in conjunction with the SANCCOB Seabird Monitor based on Bird Island conducted emergency interventions following severe weather systems across Algoa Bay that resulted in adult African penguins abandoning their nests. “Many of the nests were either destroyed or underwater, and their chicks would have died if not for the emergency rescue efforts to retrieve them for admission to our SANCCOB facility,” says Carl Havemann, manager of SANCCOB Gqeberha. “There were chicks admitted in very poor condition that required intensive care to pull through, and they are strengthening with each passing day.”

The large admission of more than 100 African penguin chicks has incurred significant additional expenses for SANCCOB to feed, medicate and rehabilitate them to the point where they can be returned to their colony. The chicks are currently being hand-reared by dedicated staff, interns and volunteers. The centre has also admitted several injured and ill adult African penguins since the beginning of the year, while nine other seabird species have also undergone rehabilitation at the centre since January for emaciation or injuries. “The decline of African penguins is very worrying as the species is considered an indicator species to the heath of the overall marine ecosystem,” Havemann explains.

“SANCCOB values its partnership with the Ford Wildlife Foundation, and the continued support. The latest contribution will be allocated directly to the rehabilitation funds of the African penguins. The fish consumables, which includes sardines, as well as the veterinary care and medication for the seabirds at our centre is extremely costly, and the FWF contribution will assist in giving the Gqeberha centre a much-needed boost to fund these essential costs,” Havemann says.

“It costs around R8 400 per day to care for and feed the 105 African penguin chicks currently at the centre,” Havemann says. “Depending on their age at admission, chicks remain in our care until they reach fledgling age, with an average of 60 to 90 days spent at our facility. As a non-profit organisation, we are completely reliant on members of the public, as well as organisations such as the FWF to support us through funding the African penguin and seabird rehabilitation work we do. We appeal to other companies and individuals to support our efforts to protect these endangered species.

“We are also most thankful for the loan Ford Ranger from FWF which makes it possible for our teams to transport rescued birds safely, and assists with our day-to-day operations,” Havemann adds.

Algoa Bay is a marine biodiversity hotspot, and its seabird breeding islands fall within the declared Addo Marine Protected Area (MPA). The St Croix and Bird Islands together account for more than 45-percent of the total African penguin population in South Africa and are of crucial importance to the survival of this iconic and endangered species. Bird Island is also home to the world’s largest colony of Cape gannets.

“The focus of the Ford Wildlife Foundation is to keep animals in their natural habitat and protect endangered species,” says Lynda du Plessis, manager of the Ford Wildlife Foundation. “SANCCOB plays a crucial role in looking after the African penguin and seabird populations in Nelson Mandela Bay. However, SANCCOB faces so many headwinds in funding their normal operations, and then also responding to additional factors that threaten these important species.

“We contributed R50 000 to SANCCOB’s Save the African Penguin project in October last year, and are making a further R50 000 contribution this year to support the organisation’s latest rescue and rehabilitation project,” du Plessis says. “The African penguin population is already impacted by a shortage of their traditional fish stocks, as well as oil spillages and noise pollution from the busy shipping lanes in the bay.

“The contribution to the rescue project bolsters our support for SANCCOB Gqeberha, along with the loan Ford Ranger Double Cab 4×4 which enables the team to rescue and transport penguins and seabirds across the Eastern Cape. We also provide a loan Ford Ranger to the SANCCOB centre in Cape Town,” du Plessis adds.

SANCCOB is a registered non-profit organisation whose primary objective is to reverse the decline of seabird populations through the rescue and rehabilitation of ill, injured, abandoned and oiled seabirds, and return them to the wild – especially endangered species like the African penguin. In a normal year where no oil spills occur, SANCCOB treats up to 2 500 seabirds.

The SANCCOB Gqeberha Centre is based in the 366-hectare Cape Recife Nature Reserve on Marine Drive near Summerstrand. The facility is open to the public, and provides educational tours and popular daily feeds for the penguins as one of its most important fund-raising mechanisms. Along with a new rehabilitation pool, the facility is equipped with a seabird hospital with a surgical theatre and intensive care unit (ICU).

For over 30 years, Ford Motor Company of Southern Africa (FMCSA) has actively been involved in the conservation of wildlife and ecosystems in South Africa and sub-Saharan Africa. The Ford Wildlife Foundation (FWF), which was established in 2014, continues FMCSA’s long-standing support of conservation projects in Southern Africa through the provision of ‘Built Ford Tough’ 4×4 Ranger Double Cabs to partner organisations. During the two-year loan period, the vehicles are monitored and serviced by Ford’s extensive dealer network to ensure optimum performance and efficiency.

For more information on SANCCOB’s Save the African Penguin project, visit the website: www.sanccob.co.za/save-the-african-penguin/.