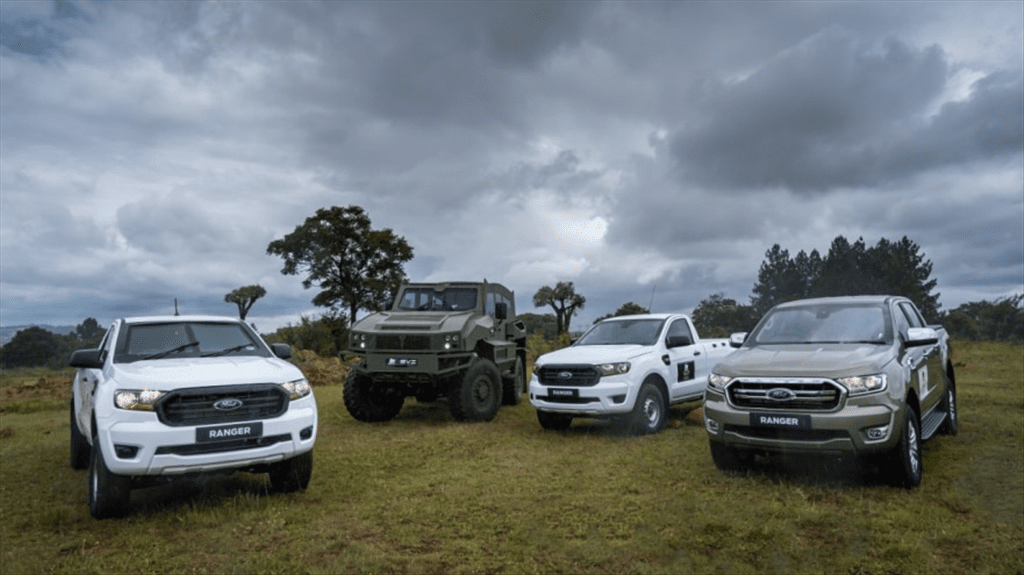 PRETORIA, SOUTH AFRICA, 28 January 2021 – Ford Motor Company of Southern Africa together with SVI Engineering are excited to announce the availability of Ford-approved armoured protection for the Ranger – a first for any original equipment manufacturer (OEM) in South Africa. The Ranger is among the best-selling vehicles in South Africa, and the introduction of armoured protection will help establish its position in an entirely new segment both for private and fleet customers.

With more than 18 000 vehicle hijackings recorded annually in South Africa, according to the South African Police Service Annual Crime Statistics for 2019/20, it makes sense to add another layer of safety for Ford customers in the form of ballistic protection.

SVI Engineering was formed in 2004 as a mechanical engineering and rapid-product development firm with capabilities in product design, finite element analysis, as well as the development, product evaluation and manufacturing of armoured products for the military, security, and civilian markets.

Ford’s commitment as well as responsibility for the safety of its customers is already highlighted by a number of safety systems currently fitted to the Ranger, including roll-over mitigation, trailer sway assist, pre-collision assist with pedestrian detection and autonomous emergency braking, to name a few.

“While we all wish there was no need for armoured civilian vehicles anywhere in the world, being able to provide outstanding levels of safety for customers is deeply rooted in Ford’s DNA, with armoured protection being no exception,” says Neale Hill, MD of Ford Motor Company of Southern Africa.

“One of our strengths as a local-manufacturer has always been our ability to adapt to new trends in the automotive industry and changing customer requirements. We see armoured vehicle protection as a next step into a potentially life-saving sector. Ford is leading the way in customer experience by offering this without affecting the Ranger’s full warranty and service plan, which is a first for any OEM in South Africa,” says Hill.

The ownership experience is further enhanced by the fact that Ranger is the only armoured bakkie in South Africa that can be ordered directly from a franchise dealer. This means customers can place an order for an armoured Ranger at any one of the 134 Ford dealerships around the country.

“SVI is proud to announce our cooperation agreement with Ford SA to provide Ranger customers with a turnkey solution for all their armoured vehicle needs,” says Jaco de Kock, CEO at SVI Engineering. “The Ranger is one of the best-selling bakkies in South Africa and this agreement expands SVI’s footprint throughout Southern Africa. The quality of the Ranger mirrors the well-proven ballistic protection and track record of SVI’s armouring solutions. Customers can now procure a fully locally-manufactured armoured vehicle with OEM support.”

SVI offers two levels of Ford-approved armoured protection for the Ranger, across all models, powertrains and derivatives. The armour protection has been specifically designed with the overall dynamics, quality, in-car technology and Built Ford Tough DNA in mind.

An integral part of SVI’s armoured technology is the high-quality glass which consists of special layers of glass and polycarbonate material to withstand compression and tension forces. It is this strong combination that forms the ballistic barrier by dissipating the energy of a bullet on impact while avoiding distortion.

B4 offers customers bullet-resistant protection against handguns up to a .44 Magnum. This is the typical anti-hijack solution that also offers protection against brick-throwing and other hand-held projectiles. The protection consists of 18-21mm armoured glass in combination with Kevlar sheets for the body. It is extremely discreet and, at only 280kg on the Ranger Double Cab, also lightweight with minimal impact on vehicle acceleration, fuel consumption and dynamic performance. The build time of a B4 armoured Ranger is around eight weeks.

B6 is the highest level of civilian protection allowed without a special permit and has been designed for the valuables-in-transit industry as well as high-profile individuals needing the ultimate level of protection. This has been designed to protect against the ammunition fired by the R1 assault rifle and the AK47. This comprehensive protection comprises 38mm armoured glass and special armoured steel plates. Due to the additional 650kg of armour, the Ranger’s suspension is upgraded accordingly.

By responding to customer feedback, the B4 option is available only in the discreet appearance form, which caters mainly for those individuals who want a level of armoured protection without compromising the interior and exterior aesthetics of their vehicle.

B4 and B6 armour protection covers the following areas:

· All glazing surrounding the occupants

· Rear of the cabin

Additional Ford-approved armouring options for the Ranger include:

· Run-flat ring system for the tyres

In addition, customers receive a one year/50 000km warranty on the armouring components from SVI Engineering.