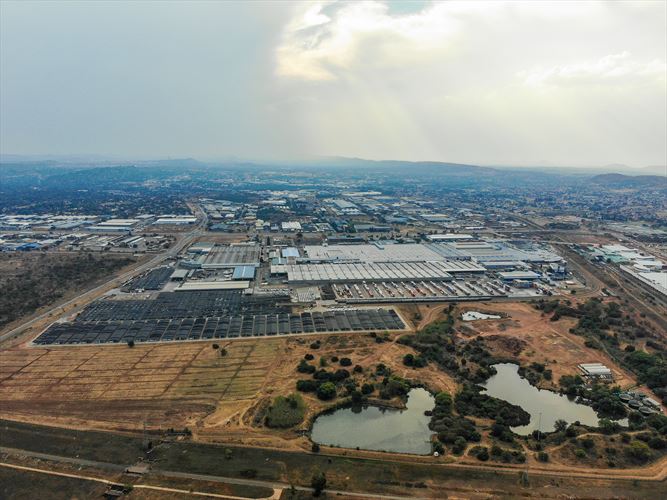 The Tshwane Automotive SEZ is an automotive component supplier industrial park that will play a significant role in bolstering further investment and job creation in the local economy. It will also be instrumental in enabling future expansion opportunities for Ford’s local operations.

“The launch of the Tshwane Automotive SEZ is a milestone achievement following five years of engagement between Ford Motor Company and government, specifically the Department of Trade and Industry,” says Neale Hill, MD of Ford Motor Company of Southern Africa. “It is an exceptionally proud moment for Ford to have partnered with South African government in the creation and development of the Tshwane Automotive SEZ, as an enabler for economic development for the Gauteng Province, City of Tshwane and the surrounding communities.

“The public-private partnership between all three spheres of government and the private sector is crucial in order to drive growth in the automotive industry, to create more jobs and to boost the economy. The government’s new region-based model for special economic zones is an important new tool to attract domestic and international investment, which will help businesses to become more competitive on a global scale,” Hill adds.

“This exciting new project testifies to Ford’s ongoing commitment to South Africa as one of the country’s largest original equipment vehicle manufacturers, as well as that of key supplier companies that are essential cogs in the wheel as we drive towards creating a brighter and more prosperous future. It is only by government, industry and communities working hand-in-hand that we can create these opportunities and fulfil our true potential.”

While the Department of Trade and Industry is the key stakeholder, and is responsible for all 10 SEZs in South Africa, the Tshwane Automotive SEZ is a collaboration on a provincial level with the Gauteng Province, the Gauteng Growth and Development Agency (GGDA) and the Automotive Industry Development Centre (AIDC) which has been appointed the operating company for this SEZ. On a local government level, the project has partnered with the City of Tshwane and the Tshwane Economic Development Agency (TEDA).

As an extension of the Gauteng Province’s greater OR Tambo Special Economic Zone, the Tshwane Automotive SEZ is aimed at driving investment in the City of Tshwane, supporting the economic development of surrounding communities and, ultimately, becoming a world-class automotive manufacturing hub.

The Tshwane Automotive SEZ will be launched in several phases, with construction already underway for the initial 81 ha phase. Once completed, the SEZ will span 162 ha of land currently owned by the City of Tshwane. The SEZ forms an integral part of a broader township development that will benefit the surrounding communities of Mamelodi, Nellmapius and Eesterust.

“We currently have nine Ford supplier companies that have expressed keen interest in investing in the Tshwane Automotive SEZ, which will create approximately 7 000 jobs in the initial phase,” explains Ockert Berry, VP of Operations, Ford Middle East and Africa. “Having these suppliers located adjacent to the Silverton Assembly Plant is a crucial step towards increasing the efficiency of our local operations, and unleashing further potential increases in production capacity for the domestic and export markets.

“In conjunction with the AIDC, we are engaging with further supplier companies to establish operations within the supplier park, which will ultimately create an estimated 70 000 jobs in the total value chain once completed,” Berry states.

Currently FMCSA exports the locally assembled Ford Ranger to more than 100 global markets. The Ranger is the country’s top light commercial vehicle (LCV) export, and is the best-selling pickup in Europe. The Everest seven-seater sport utility vehicle (SUV) is also assembled locally for South African customers, and for export markets in Sub-Saharan Africa.

Over the past decade, Ford’s ongoing investment in its local operations, which amounts to more than R11-billion between 2009 and 2018, saw production capacities increase from around 25 000 vehicles to 110 000 per annum when the Ranger production and export programme commenced in 2011. The most recent investment of approximately R3-billion in 2016 enabled the Silverton plant to further expand its production capacity, and it is currently capable of producing up to 168 000 vehicles per annum, or 720 vehicles per day – with around two-thirds of these vehicles destined for export markets, predominantly in Europe and the UK.

Ford’s domestic turnover now contributes over 1 percent to South Africa’s GDP. This makes the Silverton-based company a significant player in the country’s economy and manufacturing sector, as well as a major contributor to South Africa’s employment – both through direct jobs, and within the total value chain amongst supplier companies.

Along with the vehicle assembly operations in Pretoria, Ford Motor Company also supports two global diesel engine programmes at its Struandale Engine Plant in Port Elizabeth, with a combined production capacity of up to 250 000 engines per year.

Production commenced at the end of 2018 of the new-generation 2.0-litre Bi-Turbo and Single Turbo engines, with an installed capacity of 120 000 units per year. These engines are supplied to the Silverton Assembly Plant for use in the local and export Ranger, Ranger Raptor and Everest models.

Additionally, the Struandale Engine Plant is capable of producing up to 130 000 fully assembled 2.2 and 3.2-litre Duratorq TDCi engines, which are supplied to the Silverton vehicle plant for installation in the Ranger and Everest. Engines are also exported to North America, China and several customer plants in Europe.

Along with the assembly operations, the Port Elizabeth plant machines component sets, comprising the cylinder head, block and crankshaft for the existing 2.2 and 3.2 Duratorq TDCi engines. Following the recent investment and expansion, installed capacity climbed to its highest-ever figure of 280 000 sets per year to support export markets in Thailand and Argentina, as well as local engine assembly.