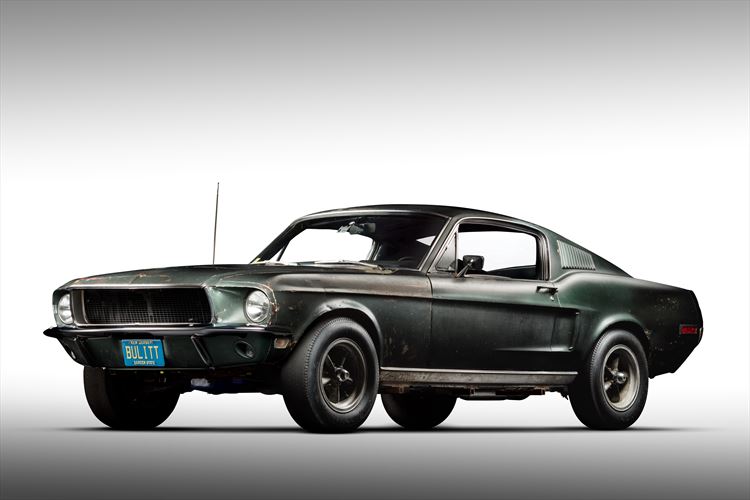 PRETORIA, South Africa, 17 April 2020 – This week, the Ford Mustang marks its 56th birthday, having been unveiled at New York’s World’s Fair on April 17, 1964. And while now might not be the best time to get behind the wheel for any unnecessary journey, it’s the perfect time to gather the family round and celebrate Mustang at the movies.

The Mustang has become a symbol of performance, chosen by heroes to conquer opponents and restore justice. It’s driven by rogues, perfectionists and the elite; drivers who know how to extract the very best from its uncompromised performance.

We’ve rounded up the best of the bunch; the top six films where Mustang is not only a central character, but in some, it could even be considered the hero.

Whilst the original iconic British spy might not be most associated with Ford, there have been several starring roles for Ford vehicles, most notably the Mustang. Although the Mustang has appeared in thousands of films and television shows, it made its debut in Goldfinger, where Tilly Masterson’s 1964 Ford Mustang meets an unfortunate ending.

Bond fares rather better when he’s picked up by a 1965 Mustang in the Bahamas in Thunderball. A few years later, Bond puts a 1971 Mustang Mach 1 through its paces as a getaway car in a memorable chase sequence through Las Vegas, escaping through an alleyway on two wheels. The stunt was performed by legendary stuntman Bill Hickman.

Starring Steve McQueen, Bullitt created arguably the most iconic movie car ever. The 1968 Mustang GT Fastback in Highland Green stars in an epic 11-minute chase through the undulating streets of San Francisco. After many years off the road (including a failed attempt by Steve McQueen to buy it back) the original vehicle was sold at auction in early 2020 for an incredible $3.74 million (R69.9-million). You can see footage of the actual car here:

Initially, the famous car chase, which lasts a heart-stopping 10 minutes and 53 seconds, was supposed to be scored, but musical conductor Lalo Schifrin suggested that no music be added to the sequence, pointing out that the soundtrack was powerful enough as it was. Over the years, the film inspired several Bullitt Mustang special editions, including 2001, 2008 and 2019 model years. 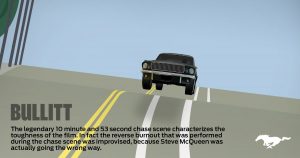 Made famous by its somewhat reckless production (it’s claimed that more than 100 vehicles were destroyed or damaged during filming) the original Gone in 60 Seconds featured a 1971 Ford Mustang Sportsroof – credited as ‘Eleanor’. And without giving the story away, one of the big car jumps saw the Mustang launch an impressive 9 metres into the air, and clear 39 metres in length, with director and star H.B. Halicki suffering a compressed spine in the landing. The car fared better.

For the 2000 remake, starring Nicholas Cage and Angelina Jolie, the part of Eleanor was ‘played’ by a 1967 Shelby GT500. Seven Elanor replicas were created for production, with five being totalled during stunt sequences. The two remaining at the end of filming went to the film’s lead star and executive producer, respectively. Cage, who did most of his own stunt driving for the film, regularly takes his out for a ride, while super-producer Jerry Bruckheimer is said to be afraid of driving his. 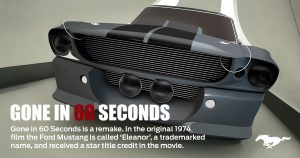 Channeling his type-cast criminal characteristics from his freshly-finished Breaking Bad days, Aaron Paul plays a recently-released from prison street racer in a cross-country race with revenge in mind. Based on the video game series of the same name, Need for Speed was obviously going to need a motoring megastar to move the movie’s main protagonist to his redemption, and that machine was Mustang.

The Mustang featured in a 2013 Shelby GT500 Super Snake Wide Body, which has a 5.8-litre supercharged V8 in two different tunes; one producing 495 kilowatts, and the other a phenomenal 635 kilowatts. Just for good measure, and not a spoiler, in the final scene before the credits, the 2015 Mustang GT prototype makes an appearance. Keen Mustang fans might also recognise the movie being played at the drive-in theatre: Bullitt. Even more specifically, the chase scene where McQueen’s ’68 Mustang is being tailed at high speed.

When it comes to explosive badass assassin movies, the John Wick series is one of the best of the modern era. And while Wick’s life seems ideally minimalistic, clean and neat, his choice of wheels was something more left-field and brutal. Enter the 1969 Mustang Mach 1, a car that matches Wick’s explosive reputation for swift and decisive action.

Directed by Keanu Reeves’ stuntman (Chad Stahelski) from The Matrix, John Wick, and its first sequel, are centred on the theft of eponymous retired master assassin’s prized possession. So iconic is the car that the chop shop that receives the Mustang refuses to strip it and change the VIN, for fear of John Wick’s legendary impeccable brutality. The next hour or so of movie time, followed by the opening minutes of the sequel, is in effect a gruesome retrieval of the stolen vintage Mustang.

Incidentally, this is not the first time Keanu Reeves has driven a classic Mustang for a film. In 1991’s Point Break, Reeves takes the wheel of a 1970 Mustang Mach 1 – pretty similar to his John Wick Mustang. Interestingly, Keanu Reeves says he did 90 per cent of his own stunts in the film which, presumably, means he pulled off a few of those incredible driving moves himself.

You might be wondering how a story about Le Mans sneaks its way onto a Mustang at the Movies list, but those paying attention will have seen Lee Iacocca – who came to be known as the “Father of Mustang” – play an integral part in getting Carroll Shelby on board to build some of the best machines to ever come out of the Ford stable. And let’s not forget the actual Mustang reveal in the movie where a rousing speech by Oscar-winner Matt Damon’s Shelby nearly lost the automotive genius of his abrasive race-driving mechanic Ken Miles, played by fellow Oscar winner Christian Bale.

Based on the true story of Shelby, Miles, and their journey to Le Mans with the Ford GT40, this double Oscar-winning flick has great performances and dramatic racing sequences that will keep you gripped until the chequered flag. And when you’ve ticked this film off your ‘must watch’ list, you can delve deeper with a documentary about Ford’s return to Le Mans in 2016 with the Ford GT here: https://youtu.be/vYlEI46g2vU.

Bonus feature: I Am Legend

If you were the last man on earth, what would you drive on the open and deserted streets of a post-apocalyptic New York? Will Smith’s character Robert Neville chose a supercharged red 2007 Mustang Shelby GT500 as his companion (plus his dog) in their fight for survival.

Reports suggest that of the six cars built for the movie, five were damaged or crushed after the film wrapped – leaving one for collectors to bid over. The production company held on to the car for a few years, but it seems it was sold to a car dealer in Connecticut in late 2019 where it was listed for $150,000 (R2.8-million). 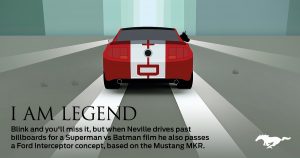