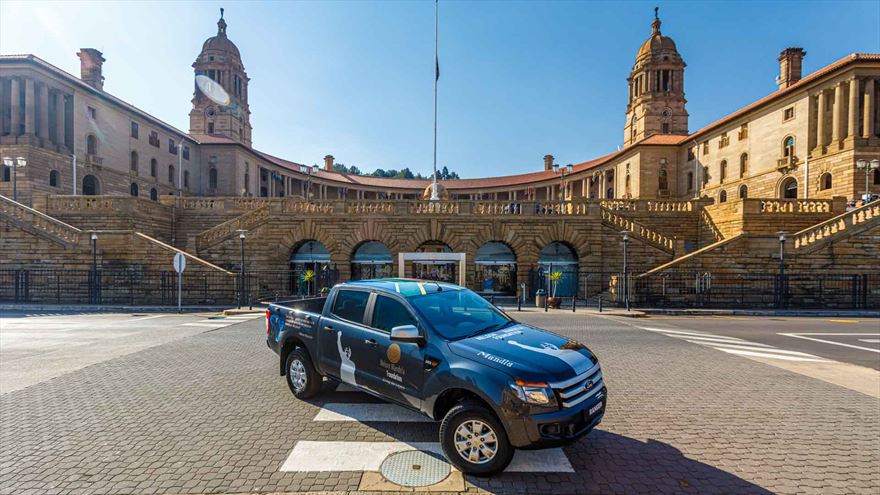 Pretoria, South Africa, 29 July 2020 – Nelson Rolihlahla Mandela was born into the Madiba clan in Mvezo, Transkei, on 18 July 1918. In celebration of his esteemed legacy the world celebrates Mandela Day on the 18th of July each year, and Mandela Month throughout the month of July.

This year, the manufacturing team at Ford Motor Company of Southern Africa (FMCSA) has honoured Madiba with a very unique tribute, transforming a Ford Ranger into a one-of-a-kind piece of mobile art for donation to the Nelson Mandela Foundation.

The Foundation served as his base for his charitable work, covering a wide range of endeavours: from building schools to HIV/AIDS work, from research into education in rural areas to peace and reconciliation interventions. Five years after it was established the Foundation began its transition into an organisation focused on memory, dialogue and legacy work.

“At Ford we are very proud of our South African heritage,” said Neale Hill, Managing Director of FMCSA. “The company has an exceptionally proud legacy in the country spanning more than 96 years – one built on continued investment and innovation to produce segment-defining products, empower communities through creating job opportunities, and striving to improve the world around us for a brighter future. No one did more in pursuit of the South African dream than Madiba himself, it is thus a privilege to be able to hand over this one-of-a-kind Ranger to the worthy Nelson Mandela Foundation.”

The unique creation is adorned with a South African flag on the roof and portrait of Mandela meticulously painted on the bonnet, while the side panels and rear tailgate of the vehicle pay further tribute to the Nelson Mandela Foundation and celebrate 18 July as Mandela Day.

The unique designs were done completely by hand by four talented artists that work at the Silverton Assembly Plant’s paint shop in Pretoria where the Ford Ranger is produced. It took the team 48 hours – mainly outside of their regular shift work at the plant – to produce the finished artwork.

“For all of us at the paint shop this was a very exciting and humbling opportunity, that gave our artists an opportunity to showcase their skills”, explained Manufacturing Engineering Manager Dorah Mmekwa, who led the project. “At first the team were quite nervous. Mandela’s image is so iconic, the team were eager to do him and the Foundation justice. Once they got started it was clear there was no need to be anxious. The vehicle looks superb and we are all extremely proud to have been a part of its creation.”

This is not Ford’s first foray into creating art Rangers. Last year the employees at the Silverton Assembly Plant created Stimela in celebration of Heritage month. “Stimela was a tribute to Ford’s proud 96-year manufacturing history locally, as well as a fitting representation of our nation’s rich heritage and diversity,” said Ockert Berry VP of Manufacturing at FMCSA.

The heritage day tribute car was adorned with a giant national flag stretching all the way from below the imposing grille, up and across the bonnet, then over the roof of the double cab, the vehicle’s tailgate was decorated with Ndebele tribal art and a map of South Africa showing the location of Ford’s plants in Gauteng and the Eastern Cape.

“Just like Stimela, Mandla – as the latest Ranger is now known – is a fully functional vehicle, right off the same assembly line as all the other South African-built Ranger, Ranger Raptor and Everest models built in South Africa,” Berry added.

Ford’s tradition of naming its art cars gives the nearly 3 500 staff an opportunity to participate in the fun. Staff were asked to submit their preferred title for the car and it was Mandla that was ultimately selected.

“It pays homage to the powerful slogan “Amandla… Awethu”that was often chanted by Tata Nelson Mandela when he had his fist clenched up in the air. That vision of him is still in so many South African’s memories and is a prominent feature of the artwork on the vehicle. In addition Mandlais a very popular Zulu/Xhosa name that means power or strength. I’m sure you’ll agree that this is a fitting description for our powerful Ranger,” quipped Hill.

Mandla is not destined to be an exhibition piece though, the Nelson Mandela Foundation will be putting theRanger through its paces in their work with various projects particularly in the areas of education and community upliftment.

“We are honoured to accept this generous donation from the Ford team,” said Yase Godlo of the Nelson Mandela Foundation. “The last few weeks we have been engaging regularly with the team on the project. Ford’s passion and commitment to making the vehicle a unique and fitting tribute to Mr Nelson Mandela has been admirable.

“Our mission is to contribute to the making of a just society by mobilising the legacy of Nelson Mandela, providing public access to information on his life and times, and convening dialogue on critical social issues. We look forward to being better able to complete the tasks associated with this mission enabled by the Ford Ranger,” Godlo concluded.

A special video commemorating this special Ranger can be seen at: https://www.youtube.com/watch?v=sNkZoOzcWpM

Editor’s note: The following Ford employees were responsible for the hand painted art work on the Nelson Mandela Foundation Ranger.