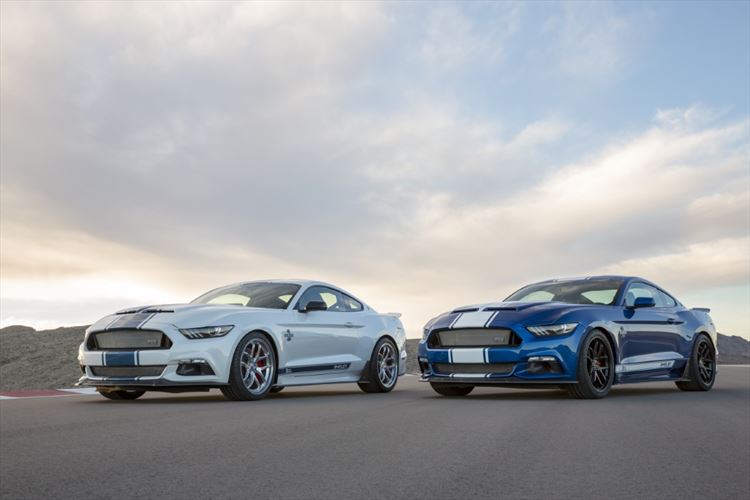 PRETORIA, SOUTH AFRICA, 16 July 2020 – Limited production, a Le Mans-winning, 7.0-litre V8 engine and an 800-kilometre test of Goodyear’s latest performance tyres. These were the main factors that introduced the first Shelby Super Snake to the world. As a result, that 1967 Shelby Super Snake became the genesis for the first Ford Mustang-based muscle cars that Shelby American has now built into a pantheon of loud, extreme and exclusive Mustangs.

It’s on World Snake Day, 16 July, that Ford Motor Company of Southern Africa (FMCSA) chooses to pay homage to Carroll Shelby’s first-ever Super Snake, as well as the models that have since followed suit. Shelby’s determination to push the performance envelope and make a name for himself has long provided Mustang owners with a higher footing when it comes to outright performance and looks. The Shelby Super Snake is one of the most well-known nameplates of them all, created more than fifty years ago and going from strength to strength.

The year 1967 was a dominant period in Ford’s motorsport history, thanks to the Ford GT40s which had dominated Le Mans the year before with a podium sweep. Besides using the 7.0-litre V8, these venerable race cars also ran on Goodyear rubber, and it was the launch of the new road tyres that precipitated the first ever Super Snake.

Shelby was commissioned to build a special GT500 powered by the same mighty 7.0-litre 427 engine instead of the Interceptor 428 unit under the hood of all other GT500s. With more power going to the road, Shelby modified the Super Snake with larger front brakes, a Detroit Locker (an automatic locking differential for more grip), traction bars as well as tall gear ratios to achieve a higher top speed. In Carroll’s hands the car achieved a top speed of 273 km/h, cementing it as the fastest car in its class. In Carroll’s own words looking back on that day “I told them that I wanted to build a vehicle that could blow the doors off of most anything on the planet.”

However, despite that car being one of the most definitive Mustangs of all time, the Super Snake moniker would lie dormant for 40 years, until being revived in 2007 with the far more modern Mustang. The Super Snake name and unmistakeable signature detailing now represents today’s most iconic-looking Mustangs on the road… with the venomous bite to match.

“The name ‘Super Snake’ is legendary because the one that Shelby built was the pinnacle of muscle cars in 1967,” added Amy Boylan, president of Shelby Automobiles at the relaunch of the 40th Anniversary Edition Super Snake. “We’re bringing that concept forward 40 years for customers who own a Ford Shelby GT500. We’ll give their car amazing new capabilities.”

These capabilities continue to catch the eye of South African car enthusiasts with a deep fascination for Ford’s muscle cars. When FMCSA announced that it would bring the iconic Mustang in right-hand drive, Shelby SA immediately entered into discussions with Shelby American to give the iconic brand a platform in Sub-Saharan Africa. In June 2016, the first five cars were presented to the South African motoring public, and ever since it’s been possible to upgrade the Mustang’s standard performance, handling and cosmetics to those of a bonafide Shelby Super Snake.

“The Ford Mustang is already the most popular sports car in the world but there is a niche group of customers who want to experience Shelby’s pursuit to improve even further what Ford has perfected over the years. Having Shelby American represented in South Africa keeps the Shelby nameplate alive for current and future generations of local Mustang fans”, says Atloli Lesela, brand manager for passenger cars at FMCSA.

Based on the world-class Ford Mustang GT, the new supercharged Super Snake is equally capable on the road and the track, according to Shelby SA. “The new Super Snake is an exercise in subtle details, and features many first-to-market products,” explains Peter Lindenberg who heads up Shelby South Africa.

Working with Ford Performance, Shelby American sharpened the handling of the independent suspension and then upgraded the brakes with massive calipers and discs. Under the functional hood, the Super Snake combines Ford’s iconic 5.0 V8 engine with forced induction to deliver 500kW; optional supercharg­er upgrades can pump out over 560kW!

The Super Snake, besides a muscular engine lurking beneath an angular bonnet, is further distinguished by interior as well as exterior appointments. Lindenberg says that the Super Snake’s bonnet’s vents, designed to look like snake eyes, are among the standout and visually unique characteristics.

The trademark Shelby experience and transformation runs through the Mod Shop, with South Africa’s Western Cape being one of the furthest and most remote places to join this limited number of Mod Shops worldwide. “There are only seven Mod Shops outside of America,” adds Lindenberg. “Three are in Canada, and one each in Europe, Australia, China and South Africa. The Mod Shop is where the upgrades are done to the customer’s specification. Our technicians are trained at Shelby American and we only use Shelby components.”

“The work of Carroll Shelby and his team in the 1960s continues to influence everything we do today at Shelby American,” says Vince LaViolette, Shelby American Vice President of Operations and Head of Development. “While ‘iconic’ is overused, there’s no better way to describe Carroll’s achievement when creating the Super Snake.” The legend lives on in the latest model which continues this proud legacy of pioneering performance.