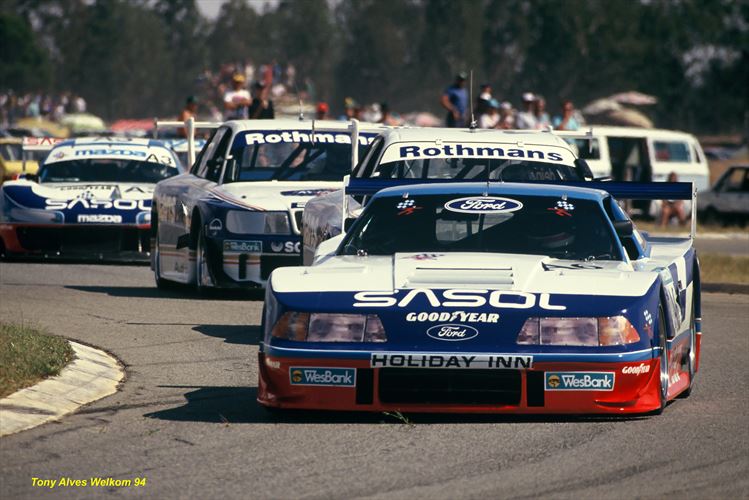 PRETORIA, South Africa, 07 May 2020 – Racing is in Ford’s DNA and it all started with company founder Henry Ford whose only ever race and race victory led to the subsequent formation of the Ford Motor Company.

Ford’s remarkable upset victory over Alexander Winton, then considered America’s greatest racer, came during the 1901 Sweepstakes Race at Grosse Point in Michigan. The win brought investors, inspired by Ford’s ability to engineer and build a more superior car than his experienced rivals. In 1903, eighteen months after the race, Henry founded the Ford Motor Company and put his dream of making a mass-produced automobile into action.

Since then, Ford has turned to racing to prove its products and technologies against the best in the world. At last count, the company has 176 Formula One, 676 NASCAR, 91 World Rally and 330 V8 Supercar wins to its name, and countless other victories and podium results at grass roots, national and international level racing.

We’ve gathered a few highlights and included some unforgettable moments from South Africa’s own unique racing heritage. It’s guaranteed to bring back some warm and fuzzy nostalgia among motorsport fans, old and young.

Ford and the making of the NASCAR Mustang

Ford has had a long association with NASCAR. In fact, a Ford piloted by Red Byron and run by Raymond Parks, won the very first NASCAR race at Daytona Beach and Road Course in 1948. The following year, the first Strictly Stock Division race – the category which went on to become the premier NASCAR Cup Series – was won by Jim Roper at the Charlotte Speedway in North Carolina in June 1949. Roper drove his Lincoln, Ford’s premium brand, straight off the showroom floor to North Carolina to compete and claim the famous victory.

Ford announced in 2018 that the Ford Mustang would compete at NASCAR’s highest level for the first time, starting in the 2019 season. While the Mustang has had a long history of racing – starting in 1964 with the Tour de France Automobile – it had never been used at NASCAR’s top level. This link will take you to one of two videos that highlight the work that went into developing the car. 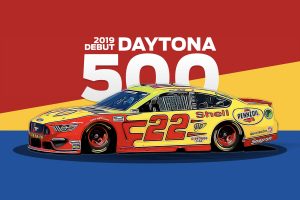 Ford’s podium lockout during the 1966 24 Hours of Le Mans race, where Ford finished first, second and third in the same race with the GT40, has been described by company executive chairman Bill Ford as “the defining moment in Ford’s race history”. Half a century later, the company returned to France to attempt victory again, this time with the Ford GT. This documentary tells the story behind that historic victory in the 1960s, and the team’s successful return in 2016. 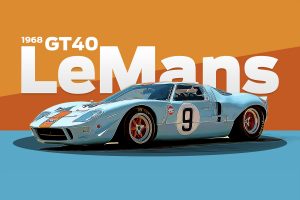 The Escort MkII BDA went on a consecutive championship winning streak from 1979 to 1982. Sarel came close to championship glory in 1992 and 1993, this time driving an all-wheel drive Ford Laser. The Ford Laser won its fair share of races, eventually ending runner-up in both seasons. The Ford Laser also opened the door for a young South African rally superstar named Enzo Kuun who went on to become a multiple champion. This short video gives you a taste of the excitement that the Escort MkI and MkII engendered. 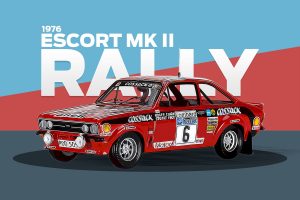 Get behind the wheel of Bob Tasca III’s 8,200kW Mustang NHRA Funny Car and experience the sheer explosive power of hitting 530km/h in under four seconds. 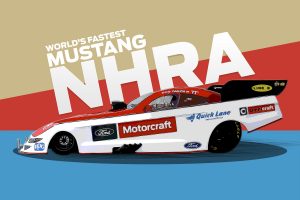 Ford and the World Rally Championship

In January 2020, Ford’s partners in the FIA World Rally Championship (WRC), M-Sport celebrated its 250th consecutive points finish. The record started with Carlos Sainz and Colin McRae in 2002, and since then 22 drivers and 28 co-drivers have contributed to the achievement which includes seven world titles, 50 victories and 185 podiums. This video takes a look back at some of the most poignant moments over the past two decades. 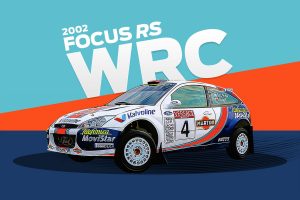 The AA Fleetcare Series and Touring Car Championship in the early 1990s is often considered the high-water mark of SA circuit racing and attracted international drivers and bespoke machinery that really gave credibility to the phrase ‘Race on Sunday, Sell on Monday’. Sarel van der Merwe was once again back at the wheel of a Ford, in the form of the Mondeo entry, pairing up with Steve Wyndham and later with Ben Morgenrood. International driver flavour was added by New Zealander Paul Radisich and British driver Kelvin Burt, competing in the 1994 International Touring Car Championship held at Kyalami.

Kiwi-driver Scott McLaughlin dominated the 2019 Australian Supercars Championship in his DJR Team Penske Racing Mustang. McLaughlin won 18 of the season’s 36 races, including the iconic Bathurst 1000, to hand the Mustang its maiden championship. You can view behind the scenes action on the team’s official YouTube channel here, and catch some of the action on the Supercars channel here. 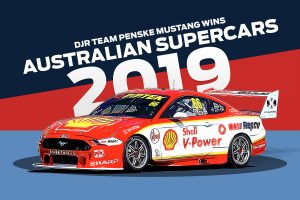 The Sierra XR8 was locally developed by Ford’s Motorsport department using the Mustang’s carburettor-fed 5.0-litre V8. In order to qualify for the championship’s rules, around 200 production versions needed to be built and just like that the fastest production Sierra in the world was instantly born, right here in South Africa in the early 1980s.

The car was raced in the 1985 Group 1 championship by John Gibb and Serge Damseaux, and later a wilder version known as “The Animal” was raced by Willie Hepburn in the Modified Saloons series.

Ken Block’s flamboyant driving and exploits with his highly modified rally and rallycross Ford Fiestas and Focus models, and his wild 1965 Mustang – the only four-wheel drive version in the world – have made him a YouTube sensation. Often spectacular, Block’s commitment to entertaining fans is unparalleled. His Climbkhana video, filmed at the famous Pike’s Peak hillclimb course, was one of the most spectacular pieces of performance driving ever produced, and has more than 27-million views on YouTube! You can watch a behind the scenes snippet here.

Block’s breathtaking array of fast Fords also includes a very special RS200 from the legendary Group B rally era, a modernized version of the iconic Escort Cosworth which he competes with in rallies around the world, and a wild 680kW 3.5 EcoBoost V6-powered F-150 Hoonitruck that he raced up another of the world’s most dangerous roads for Climbkhana Two – Tianmen Mountain in China, which you can watch here.

Johannesburg businessman and SA Hall of Fame inductee Basil Green is synonymous with modifications to Fords and his meticulous work was enough to have them approved and sold through Ford’s countrywide dealer network with a full factory warranty. Of all his creations, everyone comes back to the iconic Ford Capri Perana V8, which was SA’s fastest locally produced road car and was unbeatable on the track in the 1960s and 1970s.

The Perana V8, which was raced locally with its distinctive orange Gunston livery and driven by Bobby Olthoff in the Group 5 category, won 13 of the 14 races in the 1970 season. With a lightweight V8 from the Mustang it was capable of over 270km/h on the old Kyalami circuit’s long main straight, and topped the saloon car lap records at every one of South Africa’s tracks. Around 500 of these Peranas were built by Basil Green Motors, and their rarity is catapulting their value both on home soil and abroad. They also produced a variety of other fast Fords, including the Escort and Cortina. 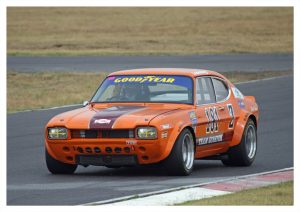 The V8-powered Ford Ranger has been a front-runner in the South African Cross Country Series (SACCS) for several years, winning on its debut in 2013 with the young Lance Woolridge behind the wheel, along with co-driver Ward Huxtable. Numerous race victories followed over the ensuing years, culminating in Woolridge and Huxtable scoring back-to-back Class T Production Vehicle titles for the Ford Castrol Cross Country Team in 2018 and 2019.

Last year, the team, which is run by Neil Woolridge Motorsport (NWM), won six of the season’s seven races in Class T, including an impressive overall victory in Heat Two of the Toyota 1000 Botswana Desert Race.

Earlier this year it was announced that the team would campaign the race-prepared Ford Ranger in the premier FIA-class of the SACCS. NWM made the jump to the top-tier with its current V8-powered Ford Ranger, but an all-new Ranger powered by a twin-turbocharged 3.5-litre EcoBoost V6 petrol engine is currently being built, and is due  to make its debut in the second half of the year. Here’s the link to the NWM Ranger in action. https://youtu.be/EzactkNd2_I 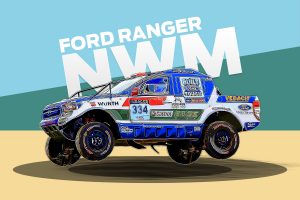 Sarel and the ‘Stang

In the early 1990s Sarel joined forces with Ford for South Africa’s most powerful, loosely regulated era of WesBank Modifieds. To get their hands on a competitive car they contacted Jack Rousch who was campaigning a Ford Mustang in IMSA and NASCAR in the US, even winning the IMSA GT Championship in 1993. In his book Supervan and I, Sarel remembers buying the car for R500 000, ‘a bargain’ he describes.

The Mustang arrived in Port Elizabeth for the last round of the 1993 championship and in 1994 the Mustang with its 450kW 6.0-litre V8 and spaceframe chassis, as well as Sarel at the wheel, won the championship. It was just the beginning of Sarel’s glorious relationship with the ‘Stang.

In 2000 and 2001 he raced the Mustang alongside the ever-popular Gugu Zulu as a mentorship programme. Sarel picked up the championship silverware in both those years as Gugu Zulu adapted to the raw power of the V8 Mustang. Sarel re-emerged from retirement in a Mustang for the inaugural 2009 Simola Hillclimb event, piloting a widebody silhouetted ‘Stang produced by Owen Ashley. The car demonstrated profound agility and speed on the narrow 1.9km course and was unbeatable with ‘Supervan’ behind the wheel, taking the overall victory on debut.